“Thank you for letting me know about this concert…

The diversity of music presented was amazing…

This was a really “fun concert”… You were the best…”

(This compliment was given to every chorus there!)

These comments were heard all around me as I left Normanna Hall in Everett WA following the SANGERSTEVNE SPRING CONCERT on May 1st, 2011.  The performance was presented by five different Nordic ladies choruses: 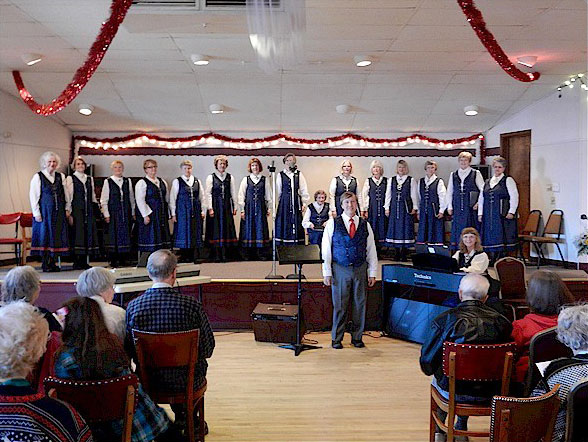 Sounds simple?  It was anything but simple…the diversity of music was amazing starting with the Norwegian Ladies Chorus of Seattle singing  Bruremarsj (Wedding March), a joyful old Norwegian folksong with no lyrics!  This was followed by a sorrowful folk lullaby, and “Sigrid’s Song”, a story about a young girl looking for a sweetheart. They completed their set with “Silver”, a Henrik Ibsen poem set to music which describes silver as permanent as sorrow.  The music was varied and exciting; their nineteen singers were under the direction of Julie Svendsen, and accompanied by Thomas Varas.

The Swedish Women’s Chorus opened their performance with a Swedish folk melody, “Vårvindar friska”, a celebration of spring, followed by “Sjösala vals”, a lilting waltz, and “Uti vå hage” (Here in our Grove), a song of new love and all the newly blooming flowers of spring.  Their last song, “Så länge skutan kan gå”, (As Long As the Boat is Afloat), starts out on a hopeful note only to end with..“ remember that soon the bell tolls for you: Ding, ding, dong!” The vocal confidence and precision of these ten  ladies was a rewarding experience for the audience.  They are under the direction of Maria

Männisto and accompanied by Christine Nyberg-Huffstetter. In this Spring Concert it was apparent that each chorus chose to celebrate spring.  The Bellingham Damekor’s sixteen singers began with a sprightly rendition of “Valdrisvisen”, (A song of Valdris). This traditional song’s story begins with the birth of a new calf and ends with the girls, Kari and Mari, singing a song to call the cows home. The next song, “Sofðu Unga Astin Min” is an Icelandic lullaby.  Director, Steve Jensen, said the chorus chose to undertake this challenge; the beautiful solo was sung by Billie Jensen.  The song tells of a young mother who is lonesome and afraid of the deep sounds coming from the glaciers in the dark night, but she sings to her child, “Sleep long, sleep peacefully.”  The next song was “Wade in the Water”, arranged by Mark Hayes, and sung in English (Whew!).  This lively spiritual is a favorite of the chorus and they presented it flawlessly.  The solos were sung by Nancy Drew and Judy Nelson.  The closing number for the Bellingham Damekor was “My Prayer”, a prayerful song of love sung by Director, Steve Jensen, with the chorus singing back-up and accompanied by Billie Jensen.

The final set was performed by the thirteen members of the Northwest Nordic Ladies Chorus under the direction of Jerilyn Wibbens, accompanists Diane Forde and Kirsti Lee.  They chose to jump right over spring (just as we seem to be doing here in the Northwest) and start with summer: “Summarpsalm”, a hymn of joy.  The two ladies present from the Southern California Damekor, which has ten singers, joined the chorus for this number. This was followed by “Fuglevise”, (Bird Song/Mockingbird Hill), a lively Norwegian folk song.  The story it tells is of a spoof on the robin who has a visit from a cuckoo. The cuckoo sings a pretty melody and lays an egg in the robin’s nest. Another summer song follows, “I sommarens soliga dagar”. This traditional Swedish folk melody is a celebration of the long days of summer. The last song, “Mama Mia”,  featured soloists, Karen Pauley, Randi Gilbertson, Rita Belvill, Roberta Morrow and Kristina Wibbens.  This is a number from the hit musical by the same name.  The chorus obviously had a lot of fun preparing this number as did the audience in hearing it sung.

The future Minneapolis Damekor was represented by two members who joined the Massed Chorus in singing the final set. The chorus opened with “Den Blomsterid Nu Kommer”, directed by Maria Männisto.  This was followed by “Våren”, directed by Julie Svendsen, “Serenade”, directed by Jerilyn Wibbens, closing with “This is My Country”, directed by Steve Jensen.  Audience members especially enjoyed this dynamic finale, saying it was a joyful and perfect ending to the concert.

The performance was followed by a reception featuring an amazing array of refreshments, donated by the choruses and prepared by Thelma Lodge #26.  The tables were decorated with fresh flowers, and music for the reception was presented by accordianist, Ione Bard. A commemorative pin was made to celebrate this special “first ever” event.  The “Sangerstevne 2011” pins are available from Hazel Sibillia: sibillia@juno.com or Jerilyn Wibbens: jkwib@msn.com ($5.00 each).  Karen Pauley, of KSER Nordic Roots and Branches, served as Master of Ceremonies.  The event was coordinated by a committee of representatives from each chorus led by Jerilyn Wibbens of Everett.  A huge Tusen Takk to all of you.

The singers, directors, many donors and volunteers, and the audience all agreed that this is definitely an event worthy of repeating.  We look forward to seeing what the future holds.